PaleoArchive is a non-profit website, purely with scientific interest and service in mind. All documents available on the website are intended for educational, personal and scientific use. Any commercial use is prohibited.

PaleoArchive claims no copyright on the supplied documents and/or content unless explicitly stated, but appreciates acknowledgment where appropriate; hosting of the files on other websites without prior authorization is discouraged (please link to PaleoArchive instead).

PaleoArchive is listed as an electronic reference source in the Swedish libraries search service (LIBRIS) and by the Lund University Library (safir). The publications hosted on the website are regularly indexed by Google Scholar and other databases, links are becoming increasingly common at Wikipedia and other information sites.

Some works citing PaleoArchive (thanks!)

Although the majority of the literature on this website is typically old, copyright has not always expired (formally, laws also differ between countries). Given the scope and service intended by PaleoArchive, however, the provision of digital documents on the website is considered as fair use. In the case of literature originally published by public institutions, the documents are regarded as public domain and their provision on the website is justified as a reward to funding agencies (most notably tax payers). Please contact the webmaster about any concerns regarding the documents hosted by PaleoArchive.

Throughout history, science has taken many (mis)steps toward the current state of knowledge – some approaches, ideas, lines of thought, paradigms, etc., have held up better than others, and some are considered controversial or objectively incorrect by modern standards. Unless specifically noted, PaleoArchive does not evaluate the scientific merit/quality of data and ideas expressed in scanned publications; the original authors are accountable for whatever is written, and the publications should be considered in their historical context. However, where known, corrigenda and errata are supplied.

In order to maximize the literature collection on the website, PaleoArchive gladly accepts scanned geoscience publications from around the world. Publications should be sent in PDF format to this email address, accompanied by a description of the file(s); publications in languages other than English are best accompanied by a translated title and appropriate bibliographic details. Please check the files for malware and viruses prior to submission. Files are received and hosted on PaleoArchive under the assumption that they represent public domain. Links to specific publications are also appreciated. Contributors will be duly acknowledged on the website (see below).

PaleoArchive is privately funded and maintained by Anders Lindskog, who is currently active as a researcher at the Department of Geology, Lund University, Lund, Sweden, and closely collaborating with colleagues at the Department of Earth, Ocean and Atmospheric Science, Florida State University, Tallahassee, USA. Anders is currently Chairman of the Lethaia Foundation. 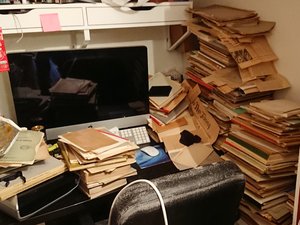 A peek into the PaleoArchive 'headquarters'...

· Per Ahlberg is thanked for supplying printed originals and for contributing scanned literature to Uploads & Links.

· Ole A. Hoel is thanked for contributing scanned literature to Uploads & Links.

· Helena Klein is thanked for supplying printed originals and for help with registrations in databases.

· Per Wahlquist is thanked for contributing scanned literature to Uploads & Links.

· Department of Geology, University of Tartu is thanked for supplying printed originals.